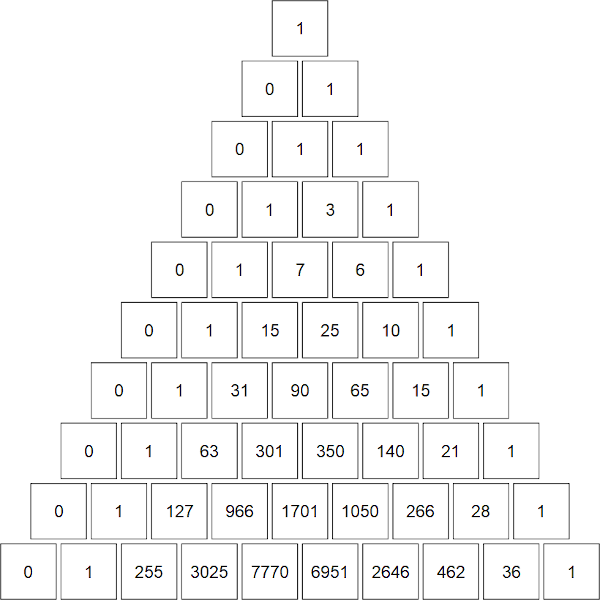 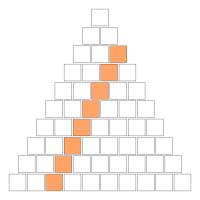 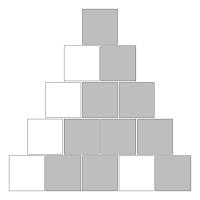 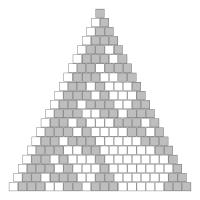 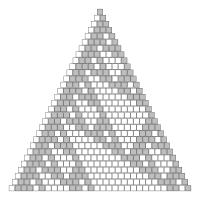 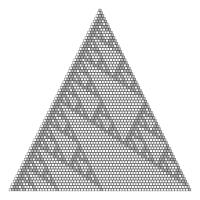 2021-01-03
It's 2021, and the Advent calendar has disappeared, so it's time to reveal the answers and annouce the winners. But first, some good news: with your help, Santa received all his letters and Christmas was saved!
Now that the competition is over, the questions and all the answers can be found here. Before announcing the winners, I'm going to go through some of my favourite puzzles from the calendar, reveal the solution and a couple of other interesting bits and pieces.

My first highlight is this puzzle from 5 December, that I think doesn't seem obvious that there's even a unique answer until you spot some nice properties of dice.

The totals that are equally likely add up to 7 times the number of dice.
This can be seen by using the fact that the opposite sides of a dice add up to 7: for each way of making a given total with \(n\) dice, there is a way of making \(7n\) minus that total by looking at the dice from below. Therefore \(T\) and \(7n-T\) are equally likely. (This also holds true (but is harder to explain) if you rearrange the faces of the dice so that the opposite faces no longer add to 7.)
Therefore today's number is \((521+200)/7\), which is 103.


My next highlight is the puzzle from 15 December. I had a lot of fun trying to write this one. At the end, I tell you that T represents 4: this puzzle still has a unique answer without this, but it was too hard to get started.

When talking to someone about this Advent calendar, you told them that the combination of XMAS and MATHS is GREAT. They were American, so asked you if the combination of XMAS and MATH is great; you said SURE. You asked them their name; they said SAM.
Each of the letters E, X, M, A, T, H, S, R, U, and G stands for a different digit 0 to 9. The following sums are correct:
Today's number is SAM. To help you get started, the letter T represents 4.


My next highlight is the puzzle from 16 December. I had a lot of fun writing this one too. At least a few people seem to have enjoyed solving it, as indicated by this comment.

Solve the crossnumber to find today's number. No number starts with 0.


My final highlight is the puzzle from 21 December. My method for solving this one was quite complicated. Let me know in the comments or on Twitter if you have a better way of solving it.

Once you've entered 24 answers, the calendar checks these and tells you how many are correct. I logged the answers that were sent for checking and have looked at these to see which puzzles were the most and least commonly incorrect. The bar chart below shows the total number of incorrect attempts at each question.
You can see that the most difficult puzzles were those on 6, 14, 19, 21, and 24 December; and the easiest puzzles were on 3, 9, 10, 16, and 17 December.

The solutions to all the individual puzzles can be found here. If you want to read some alternative solutions to the puzzles, you can find Alira's solutions here, including a very nice explanation of how the final clues fit together to find the directions to Santa's house.
Using the daily clues, it was possible to work out that Santa's house could be found by following the directions 3,7,1,1,4,3,3,4,9,3,3,9 on this map. 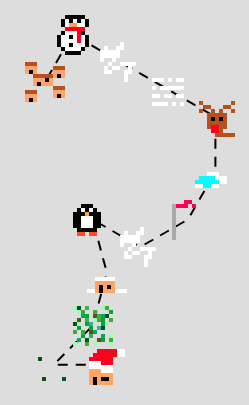 Alternative directions to Santa's house.
I'll leave you to work out how many different ways there are to get there...
Here's the full collection of tiles that you could find by walking around the map: 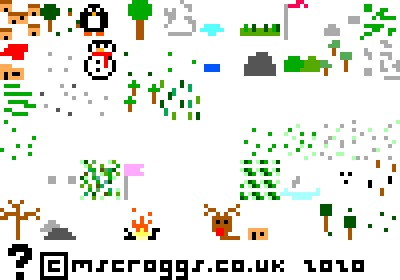 Comments in green were written by me. Comments in blue were not written by me.
2021-01-06
Dec 15th was my favorite. I kept making a logical error and had to restart, so it took me way to long, but I really enjoyed it.

The 16th was just cheeky, after I spent way to much time on the 15th it was nice to have something like that!

It's been 16+ years since I did any probability or combinations and permutations, so it was nice to brush off that part of my brain, not that I did any of them well, but it should serve me well when my kids start doing them and ask me for help.
Dave

2020-12-03
In November, I spent some time designing this year's Chalkdust puzzle Christmas card.

The card looks boring at first glance, but contains 9 puzzles. By splitting the answers into two digit numbers, then colouring the regions labelled with each number (eg if an answer to a question in the red section is 201304, colour the regions labelled 20, 13 and 4 red), you will reveal a Christmas themed picture.
If you want to try the card yourself, you can download this pdf. Alternatively, you can find the puzzles below and type the answers in the boxes. The answers will be automatically be split into two digit numbers, and the regions will be coloured...
Tags: chalkdust magazine, christmas, christmas card, puzzles

Comments in green were written by me. Comments in blue were not written by me.
2021-01-03
@JDev: lots of the card will still be brown once you're done, but you should see a nice picture. Perhaps one of your answers is wrong, making a mess of the picture?
Matthew

2020-12-29
I finished all of the puzzles but the picture is far from colored in. Am I missing something?

These puzzles have been a blast!
JDev

2020-12-12
@Tara: I initially made the same mistake. Maybe you didn't take into account that 6 is not one of the available digits in question 1?
Sean

2020-11-22
This year, the front page of mscroggs.co.uk will once again feature an Advent calendar, just like in the five previous Decembers. Behind each door, there will be a puzzle with a three digit solution. The solution to each day's puzzle forms part of a logic puzzle:
It's nearly Christmas and something terrible has happened: you've just landed in a town in the Arctic circle with a massive bag of letters for Santa, but you've lost to instructions for how to get to Santa's house near the north pole. You need to work out where he lives and deliver the letters to him before Christmas is ruined for everyone.
Due to magnetic compasses being hard to use near the north pole, you brought with you a special Advent compass. This compass has nine numbered directions. Santa has given the residents of the town clues about a sequence of directions that will lead to his house; but in order to keep his location secret from present thieves, he gave each resident two clues: one clue is true, and one clue is false.
The residents' clues will reveal to you a seqeunce of compass directions to follow. You can try out your sequences on this map.
Behind each day (except Christmas Day), there is a puzzle with a three-digit answer. Each of these answers forms part of a resident's clue. You must use these clues to work out how to find Santa's house.
Ten randomly selected people who solve all the puzzles, find Santa's house, and fill in the entry form behind the door on the 25th will win prizes!

The winners will be randomly chosen from all those who submit the entry form before the end of 2020. Each day's puzzle (and the entry form on Christmas Day) will be available from 5:00am GMT. But as the winners will be selected randomly, there's no need to get up at 5am on Christmas Day to enter!
As you solve the puzzles, your answers will be stored. To share your stored answers between multiple devices, enter your email address below the calendar and you will be emailed a magic link to visit on your other devices.
To win a prize, you must submit your entry before the end of 2020. Only one entry will be accepted per person. If you have any questions, ask them in the comments below or on Twitter.
So once December is here, get solving! Good luck and have a very merry Christmas!
Tags: christmas, puzzles, advent calendar

2020-12-25
@Dean: you can also go through each answer one at a time and change a digit; if the number of wrong answers goes up then your answer for that question was correct
A

2020-12-25
@Dean: Yes, I'm planning to change how that bit works. Check back tomorrow or the next day for a more fun finish!
Matthew

2020-12-25
A bit harsh that we can’t tell exactly which answers are wrong! I won’t have time to revisit every puzzle - and its kind of less fun redoing something that is already correct... :-(
Dean

2020-12-24
@Marty: Yes, I'm in the middle of correcting the clues page to add these details back
Matthew

There are 11 more comments. View all comments
Add a Comment