2018-01-02
It's 2018, and the Advent calendar has disappeared, so it's time to reveal the answers and annouce the winners. But first, some good news: with your help, Santa was able to work out which present each child wanted, and get their presents to them just in time:

Now that the competition is over, the questions and all the answers can be found here. Before announcing the winners, I'm going to go through some of my favourite puzzles from the calendar.

Pick a three digit number whose digits are all different.
Sort the digits into ascending and descending order to form two new numbers. Find the difference between these numbers.
Repeat this process until the number stops changing. The final result is today's number.

495
This puzzle revealed the surprising fact that repeatedly sorting the digits of a three digit number into ascending and descending order then finding the difference will always give the same answer (as long as the digits of the starting number are all different). This process is known as the Kaprekar mapping.
If four digit starting numbers are chosen, then all starting numbers that do not have three equal digits will eventually lead to 6174. It's not as simple for five digit numbers, but I'll leave you to investigate this...

497
Ruben pointed something interesting out to me about this question: if you remove the constraint that the answer must be a three digit number, then you see that the numbers 47, 497, 4997, 49997, and in fact any number of the form 49...97 will have this property.

Let \(n\) and \(m\) be integers. What is the largest number that cannot be written in the form \(na+mb\), where \(a\) and \(b\) are nonnegative integers?
If you didn't manage to solve this one, I recommend trying replacing the 10 and 27 with smaller numbers (eg 3 and 4) and solving the easier puzzle you get first, then trying to generalise the problem. You can find my write up of this solution here.
Pedro Freitas (@pj_freitas) sent me a different way to approach this problem (related to solving the same question with different numbers on this year's Christmas card). To see his method, click "Show Answer & Extension" in the puzzle box above.

Today's number is the smallest number with exactly 28 factors (including 1 and the number itself as factors).

Drawn by Adam Townsend
and allow you to work out where each child lives and what they wanted. Thanks Adam and Alison for drawing the elves for me.
I had a lot of fun finding place names with numbers in them to use as answers in the final puzzle. For the presents, I used the items from The 12 Days of Christmas:
I also snuck a small Easter egg into the calendar: the doors were arranged in a knight's tour, as shown below. 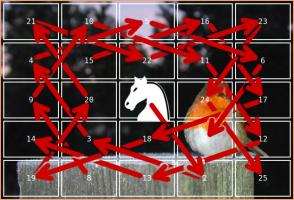 And finally (and maybe most importantly), on to the winners: 84 people submitted answers to the final logic puzzle. Their (very) approximate locations are shown on this map:

Comments in green were written by me. Comments in blue were not written by me.
⭐ top comment (2018-01-02) ⭐
Thanks! The advent calendar was great fun to take part in - and winning something in the process is the cherry on top. The riddles themselves were interesting and varied, they fitted well together in the overall puzzle, and I learned some interesting new bits of maths in the process. And now, to try my hand at the other advent calendars...

I particularly liked the riddle on the 5th of December (with walking 13 units) - it was quite tricky at first, but then I solved it by seeing that you can't end up on a square an even distance away from the centre, so the possible areas are in "circles" from the center with odd side lengths . It was quite reminiscent of showing you can't cover a chessboard with dominoes when two opposite corners are removed .
Lewis