By drawing an appropriate diagram, it can be seen that the small square has half the area of the large square. 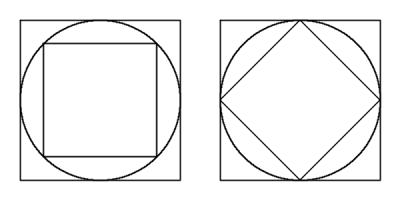 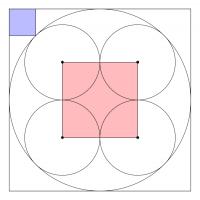 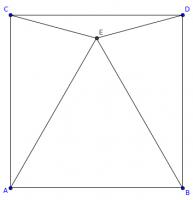 Is triangle \(ABE\) equilateral? Why/why not?

The triangle is equilateral.
To see why, add a copy of point \(E\) rotated by 90°. This is labelled \(F\) on the diagram below. 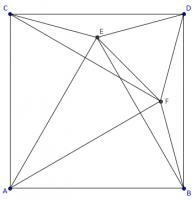 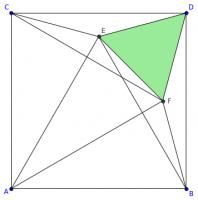 Source: UKMT Senior Maths Team Challenge 2010
Each side of a square has a circle drawn on it as diameter. The square is also inscribed in a fifth circle as shown. 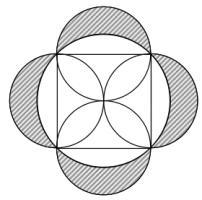 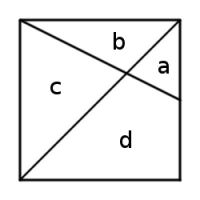 This unit square is divided into four regions by a diagonal and a line that connects a vertex to the midpoint of an opposite side. What are the areas of the four regions?

What would be the areas if the lines were a diagonal and another line which divides the sides in the ratio \(x:y\)?
Tags: geometry, 2d shapes, triangles, squares

Source: By Lewis Carroll via Futility Closet
"I don't know if you are fond of puzzles, or not. If you are, try this. ... A gentleman (a nobleman let us say, to make it more interesting) had a sitting-room with only one window in it—a square window, 3 feet high and 3 feet wide. Now he had weak eyes, and the window gave too much light, so (don't you like 'so' in a story?) he sent for the builder, and told him to alter it, so as only to give half the light. Only, he was to keep it square—he was to keep it 3 feet high—and he was to keep it 3 feet wide. How did he do it? Remember, he wasn't allowed to use curtains, or shutters, or coloured glass, or anything of that sort."

If instead a window \(\frac{3}{4}\) of the size was required, how could this be done?
Tags: geometry, 2d shapes, squares
End of page. Show older puzzles.