All 2020 advent puzzles ~ More information
Noel has a large pile of cards. Half of them are red, the other half are black. Noel splits the cards into two piles: pile A and pile B.
Two thirds of the cards in pile A are red. Noel then moves 108 red cards from pile A to pile B. After this move, two thirds of the cards in pile B are red.
How many cards did Noel start with?
Note: There was a mistake in the original version of today's puzzle. The number 21 has been replaced with 108.

Let's say there were originally \(t\) cards of each colour, and \(2a\) red cards and \(a\) black cards in pile A. After the move, there were \(t-2a+108\) red cards and \(t-a\) black cards in pile B. Two thirds of the card in pile B are red, so:
$$t-2a+108=2(t-a)$$ $$t=108$$
Therefore there were 108×2=216 cards.
Interestingly, it appears that this answer is independent of \(a\): any number of cards could be put in each pile and this situation would still work. However, only one situation could have happened unless you allow there to at some points have been a negative number of cards in each pile.
Tags: numbers, probability

The totals that are equally likely add up to 7 times the number of dice.
This can be seen by using the fact that the opposite sides of a dice add up to 7: for each way of making a given total with \(n\) dice, there is a way of making \(7n\) minus that total by looking at the dice from below. Therefore \(T\) and \(7n-T\) are equally likely. (This also holds true (but is harder to explain) if you rearrange the faces of the dice so that the opposite faces no longer add to 7.)
Therefore today's number is \((521+200)/7\), which is 103.
Tags: numbers, dice, probability

Two points along a drinking straw are picked at random. The straw is then bent at these points. What is the probability that the two ends meet up to make a triangle?

A triangle will be made if none of the segments of straw is longer than the other two added together. This is the same as requiring that each segment must be less than half the straw.
Let the length of the straw be 1 unit. Call the points \(x\) and \(y\). A triangle is made if either:
For the second condition, the allowable region is shown below. 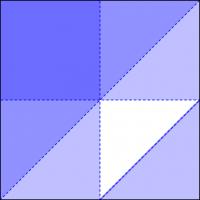 This region covers \(\tfrac18\) of the whole square. By switching \(x\) and \(y\) it can be seen that the first condition's region is the same size as the second's, plus they don't overlap. Therefore the probability of making a triangle is \(\tfrac18+\tfrac18=\tfrac14\).

Source: Futility Closet
You toss 6 fair coins, and I toss 5 fair coins. What is the probability that you get more heads than I do?

A bag contains \(m\) blue and \(n\) yellow marbles. One marble is selected at random from the bag and its colour is noted. It is then returned to the bag along with \(k\) other marbles of the same colour and \(l\) marbles of the other colour. A second marble is now selected at random from the bag. What is the probability that the second marble is blue?
Tags: probability

Source: Futility Closet
Timothy and Urban are playing a game with two six-sided dice. The dice are unusual: Rather than bearing a number, each face is painted either red or blue.
The two take turns throwing the dice. Timothy wins if the two top faces are the same color, and Urban wins if they're different. Their chances of winning are equal.
The first die has 5 red faces and 1 blue face. What are the colours on the second die?

If the first die has \(n\) red faces and \(6-n\) blue faces, what colours are on the second die?
Tags: dice, probability

Source: My Best Mathematical and Logic Puzzles by Martin Gardner
If you happen to meet two of the Jones sister (two sisters chosen at random from all the Jones sisters), it is exactly an even-money bet that both will be blue-eyed. What is your best guess of the total number of Jones sisters?

What is the next integer solution after 21 sisters?
Tags: probability

Source: Futility Closet
Can two (six-sided) dice be weighted so that the probability of each of the numbers 2, 3, ..., 12 is the same?