If \(n\) is even, a balanced set can be constructed as follows:
If \(n=4\), this set is balanced (both the triangles are equilateral):

Draw a triangle with its centre at one of the points, going through the other three points: 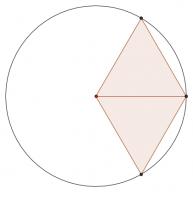 For \(n>4\), repeatedly add a two new points on the circle which form an equilateral triangle with the centre. For example, for \(n=6\), this set is balanced: 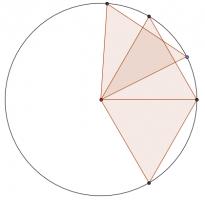 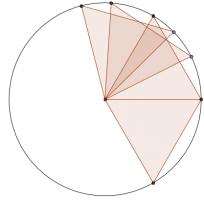 A Bézier curve is created as follows:

Source: Alex Through the Looking-Glass: How Life Reflects Numbers and Numbers Reflect Life by Alex Bellos
On a graph of \(y=x^2\), two lines are drawn at \(x=a\) and \(x=-b\) (for \(a,b>0\). The points where these lines intersect the parabola are connected. 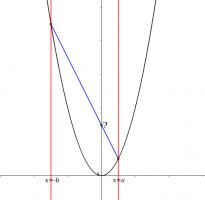 What is the y-coordinate of the point where this line intersects the y-axis?