The ace of spades

The problem can be expressed using the following probability tree: 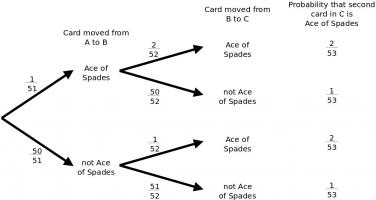 Source: Teaching Further Maths blog
2009 unit cubes are glued together to form a cuboid. A pack, containing 2009 stickers, is opened, and there are enough stickers to place 1 sticker on each exposed face of each unit cube.
How many stickers from the pack are left?

For which numbers \(n\) can a cuboid be made with \(n\) unit cube such that \(n\) unit square stickers can cover the faces of the cuboid?
Tags: numbers, shape, 3d shapes
If you enjoyed these puzzles, check out Advent calendar 2019,
puzzles about hexagons, or a random puzzle.