Source: The Hidden Mathematics of Sport by Rob Eastaway & John Haigh
What is the minimum number of times a player has to hit the ball in a set of tennis and win a standard set (the set is not ended by injury, disqualification, etc.)?

Source: My Best Mathematical and Logic Puzzles by Martin Gardner
You are given a chessboard where two diagonally opposite corners have been removed and a large bag of dominoes of such size that they exactly cover two adjacent squares on the chessboard.
Is it possible to place 31 dominoes on the chessboard so that all the squares are covered? If yes, how? If no, why not?

Is it possible to do a knight's tour on the mutilated chessboard?
Tags: chess

Source: Thinking Mathematically by John Mason
I have in mind a number which when you remove the units digit and place it at the front, gives the same result as multiplying the original number by 2. Am I telling the truth?

I have in mind a number which when you remove the units digit and place it at the front, gives the same result as multiplying the original number by 3. Am I telling the truth?
Tags: numbers

Source: The Penguin Book of Curious and Interesting Puzzles by David Wells
Jack and Jill are moving into a new flat and their grand piano presents a potential problem. Fortunately, it will just pass round the corridor without being tipped or disassembled. 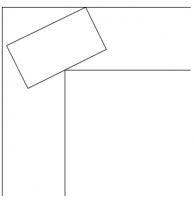 Given that its area, looking down from above, is the largest possible which can be passed around the corner, what is the ratio of its length to its width?

When halfway around the corner, the grand piano will look like this: 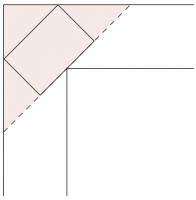 The problem then is finding the largest area rectangle which fits in the highlighted triangle: an isosceles triangle where the base is twice the height. Let the base be 2 and the height be 1.

If the corner was not a 90° angle, then what is the largest area rectangle which could fit round it?
Tags: geometry, 2d shapes
If you enjoyed these puzzles, check out Advent calendar 2019,
puzzles about regular shapes, or a random puzzle.