I regularly give talks and run workshops for groups of all ages. If you'd like me to do something at your event, drop me an email.

My most regularly given talk is about braiding, and is based around the problem outlined in this blog post. 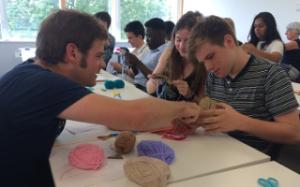 Me talking about braiding.
In this talk, I explain how to make a braid with a cardboard octogon, by repeatedly moving the third strand of wool. The talk then moves on to look at which other numbers could be used in the place of 8 (the number of sides) and 3 (the strand).
This investigation leads to a discussion of factors, multiples, and coprime numbers and encourages the audience to make and test their own conjectures. It has been described as "very engaging" and a "wonderful enrichment activity", which leads audiences to be "still pondering over a theory" long after the talk.
This talk is best when it is around an hour long, although I also have an extended two-and-a-half hour version of it that I run as a Royal Institution masterclass.

Me talking about MENACE.
The aim of this talk is to explain the basics of machine learning, using MENACE—the machine educable noughts and crosses engine. MENACE is explained in this blog post and these two Matt Parker videos (guest starring me). There is also a video of me giving a short talk about MENACE here.
This talk is best when it is around 30–45 minutes long, although I also run an extended two-and-a-half hour version of it as a Royal Institution masterclass.

This talk explored a few bits of maths applied to video games, including calculating the shortest route to complete a level of Pac-Man (based on this blog post), and the 3D and 4D surfaces that characters in 2D games live on (based on this blog post). There is a video of me giving this talk here.
This talk is best when it is around 45 minutes long.


Below, you will find a list of many talks and workshops I have given, articles I have written, and other things I've been in/on, sorted by year. I also have a scrapbook page where I collect articles about me or mentioning me.
2020