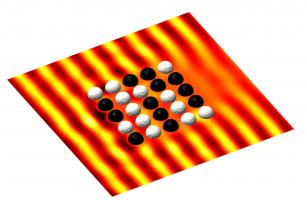 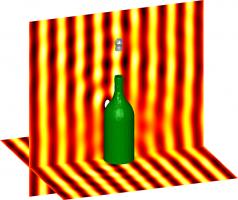 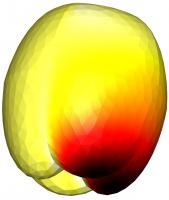 In the third chapter of my thesis, we wrote out the derivations of formulations of the weak imposition of Dirichet, Neumann, mixed Dirichlet–Neumann, and Robin conditions on Laplace's equation: we limited our work in this chapter to Laplace's equation as it is easier to analyse than the Helmholtz equation.
Once the formulations were derived, we proved some results about them: the main result that this analysis leads to is the proof of a priori error bounds.
An a priori error bound tells you how big the difference between your approximation and the actual solution will be. These bounds are called a priori as they can be calculated before you solve the problem (as opposed to a posteriori error bounds that are calculated after solving the problem to give you an idea of how accurate you are and which parts of the solution are more or less accurate). Proving these bounds is important, as proving this kind of bound shows that your method will give a good approximation of the actual solution.
A priori error bounds look like this:
$$\left\|u-u_h\right\|\leqslant ch^{a}\left\|u\right\|$$
In this equation, \(u\) is the solution of the actual PDE problem; \(u_h\) is our appoximation; the \(h\) that appears in \(u_h\) and on the right-hand size is the length of the longest edge in the mesh we are using; and \(c\) and \(a\) are positive constants. The vertical lines \(\|\cdot\|\) are a measurement of the size of a function.
Overall, the equation says that the size of the difference between the solution and our approximation (ie the error) is smaller than a constant times \(h^a\) times the size of the solution. Because \(a\) is positive, \(h^a\) gets smaller as \(h\) get smaller, and so if we make the triangles in our mesh smaller (and so have more of them), we will see our error getting smaller.
The value of the constant \(a\) depends on the choices of discretisation spaces used: using the spaces in the previous chapter gives \(a\) equal to \(\tfrac32\).

Using Bempp, we approximated the solution on a series of meshes with different values of \(h\) to check that we do indeed get order \(\tfrac32\) convergence. By plotting \(\log\left(\left\|u-u_h\right\|\right)\) against \(\log h\), we obtain a graph with gradient \(a\) and can easily compare this gradient to a gradient of \(\tfrac32\). Here are a couple of our results:

The errors of a Dirichlet problem on a cube (left) and a Robin problem on a sphere (right) as \(h\) is decreased. The dashed lines show order \(\tfrac32\) convergence.
Note that the \(\log h\) axis is reversed, as I find these plots easier to interpret this way found. Pleasingly, in these numerical experiments, the order of convergence agrees with the a priori bounds that we proved in this chapter.


These results conclude chapter 3 of my thesis. Why not take a break and refill the following figure with hot liquid before reading on. 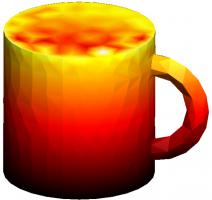