The end of coins of constant width 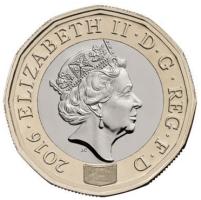 Royal Mint
Although I'm excited about meeting this new coin, I am also a little sad, as its release ends the era in which all British coins are shapes of constant width.

A shape of constant width is a shape that is the same width in every direction, so these shapes can roll without changing height. The most obvious such shape is a circle. But there are others, including the shape of the seven-sided 50p coin. 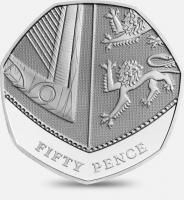 Royal Mint
As shown below, each side of a 50p is part of a circle centred around the opposite corner. As a 50p rolls, its height is always the distance between one of the corners and the side opposite, or in other words the radius of this circle. As these circles are all the same size, the 50p is a shape of constant width. 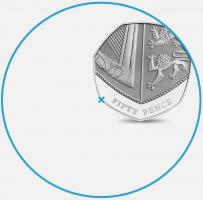 Royal Mint
Shapes of constant width can be created from any regular polygon with an odd number of sides, by replacing the sides by parts of circles centred at the opposite corner. The first few are shown below. 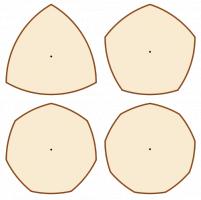 en wiki user LEMeZza, CC BY-SA 3.0
It's also possible to create shapes of constant width from irregular polygons with an odd number, but it's not possible to create them from polygons with an even number of sides. Therefore, the new 12-sided pound coin will be the first non-constant width British coin since the (also 12-sided) threepenny bit was phased out in 1971.
Back in 2014, I wrote to my MP in an attempt to find out why the new coin was not of a constant width. He forwarded my letter to the Treasury, but I never heard back from them.

When cutting a pizza into equal shaped pieces, the usual approach is to cut along a few diameters to make triangles. There are other ways to fairly share pizza, including the following (that has appeared here before as an answer to this puzzle): 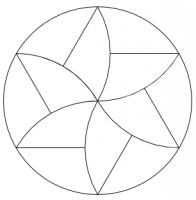 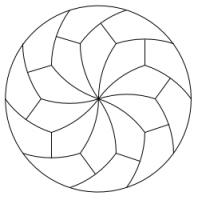 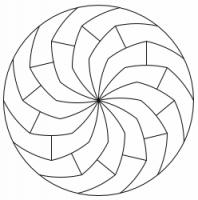 There are many more ways to cut a pizza into equal pieces. You can find them in Infinite families of monohedral disk tilings by Joel Haddley and Stephen Worsley [1].
You can't use the shape of a new pound coin to cut a pizza though.
Edit: Speaking of new £1 coins, I made this stupid video with Adam "Frownsend" Townsend about them earlier today: 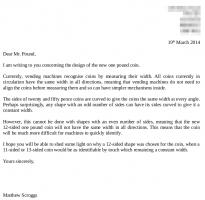 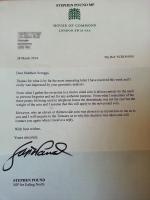 I'm excited about hearing what the Treasury has to say about it...
Tags: coins, news, reuleaux polygons

2014-03-19
Vending machines identify coins by measuring their width. Circular coins have the same width in every direction, so designers of vending machines do not need to worry about incorrectly rotated coins causing a blockage or being misidentified. But what about seven-sided 20p and 50p coins?
Perhaps surprisingly, 20p and 50p coins also have a constant width, as show by this video. In fact, the sides of any regular shape with an odd number of sides can be curved to give the shape a constant width.

en wiki user LEMeZza, CC BY-SA 3.0
3, 5, 7 and 9 sided shapes of constant width.
Today, a new 12-sided £1 coin was unveiled. One reason for the number of sides was to make the coin easily identified by touch. However, as only polygons with an odd number of sides can be made into shapes of constant width, this new coin will have a different width when measured corner to corner or side to side. This could lead to vending machines not recognising coins unless a new mechanism is added to correctly align the coin before measuring.
Perhaps an 11-sided or 13-sided design would be a better idea, as this would be easily distinguishable from other coins by touch which being a constant width to allow machines to identify it.
Tags: coins, news, reuleaux polygons