2019-11-24
This year, the front page of mscroggs.co.uk will once again feature an Advent calendar, just like last year, the year before, the year before and the year before. Behind each door, there will be a puzzle with a three digit solution. The solution to each day's puzzle forms part of a logic puzzle:
It's nearly Christmas and something terrible has happened: while out on a test flight, Santa's sled was damaged and Santa, Rudolph and Blitzen fell to the ground over the Advent Isles. You need to find Santa and his reindeer before Christmas is ruined for everyone.
You have gathered one inhabitant of the four largest Advent Isles—Rum, Land, Moon and County—and they are going to give you a series of clues about where Santa and his reindeer landed. However, one or more of the islanders you have gathered may have been involved in damaging Santa's sled and causing it to crash: any islander involved in this will lie to you to attempt to stop you from finding Santa and his reindeer. Once you are ready to search for Santa, Rudolph and Blitzen, you can find the map by following this link.
Each of the clues will be about Santa's, Rudolph's or Blitzen's positions in Advent Standard Coordinates (ASC): ASC are given by six two-digit numbers with dots inbetween, for example 12.52.12.13.84.55. For this example coordinate, the islanders will refer to (the first) 12 as the first coordinate, 52 as the second coordinate, (the second) 12 as the third coordinate, 13 as the fourth coordinate, 84 as the fifth coordinate, and 55 as the sixth coordinate.
To find a point's ASC coordinates, split a map of the islands into a 9×9 grid, then number the rows and columns 1 to 9: the first two digits of ASC give the vertical then horizontal position of a square in this grid. The next two digits then give a smaller square when this square is then itself split into a 9×9 grid, and so on. An example is show below.

The ASC coordinates of this pair of flowers are 12.52.12.13.84.55 (click to enlarge).
Behind each day (except Christmas Day), there is a puzzle with a three-digit answer. Each of these answers forms part of a fact that one of the islanders tells you. You must use these clues to find Santa and his two reindeer.
Ten randomly selected people who solve all the puzzles, find Santa and his reindeer, and fill in the entry form behind the door on the 25th will win prizes!

The winners will be randomly chosen from all those who submit the entry form before the end of 2019. Each day's puzzle (and the entry form on Christmas Day) will be available from 5:00am GMT. But as the winners will be selected randomly, there's no need to get up at 5am on Christmas Day to enter!
As you solve the puzzles, your answers will be stored. To share your stored answers between multiple devices, enter your email address below the calendar and you will be emailed a magic link to visit on your other devices.
To win a prize, you must submit your entry before the end of 2019. Only one entry will be accepted per person. If you have any questions, ask them in the comments below or on Twitter.
So once December is here, get solving! Good luck and have a very merry Christmas!
Tags: christmas, puzzles, advent calendar

Comments in green were written by me. Comments in blue were not written by me.
⭐ top comment (2019-12-13) ⭐
This search space is so large, it's way harder than trying to find Wally like in the children's books. Best to read everything carefully looking for any clues, and then solve all the puzzles and logic before searching randomly!
Did you know Wally is called Waldo in the US, Walter in Germany, and Charlie in France?
Dr. Matrix

2019-12-31
Do we get a confirmation email after submission of the entry form? I never received one, so I'm not sure if I am entered.
(anonymous)

2019-12-25
@Seth: If you find them on the map then that's all you need to do. (And if you didn't find them yet then the entry form won't appear so you definably did everything you need to do.)
Matthew

There are 15 more comments. View all comments
Add a Comment 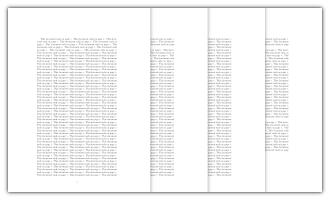 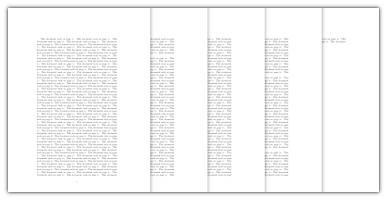 2019-09-01
This week, I've been in Cambridge for Talking Maths in Public (TMiP). TMiP is a conference for anyone involved in—or interested in getting involved in—any sort of maths outreach, enrichment, or public engagement activity. It was really good, and I highly recommend coming to TMiP 2021.
The Saturday morning at TMiP was filled with a choice of activities, including a treasure punt (a treasure hunt on a punt) written by me. This post contains the puzzle from the treasure punt for anyone who was there and would like to revisit it, or anyone who wasn't there and would like to give it a try. In case you're not current in Cambridge on a punt, the clues that you were meant to spot during the punt are given behing spoiler tags (hover/click to reveal).

Each boat was given a copy of the instructions, and a box that was locked using a combination lock. 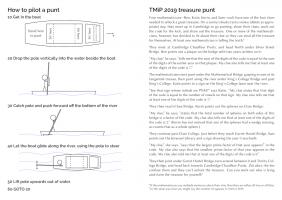 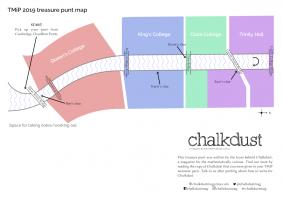 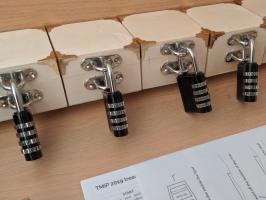 Locked boxes.
If you want to make your own treasure punt or similar activity, you can find the LaTeX code used to create the instructions and the Python code I used to check that the puzzle has a unique solution on GitHub. It's licensed with a CC BY 4.0 licence, so you can resuse an edit it in any way you like, as long as you attribute the bits I made that you keep.

The solution to the treasure punt is given below. Once you're ready to see it, click "Show solution". 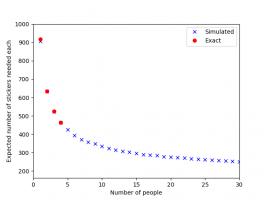 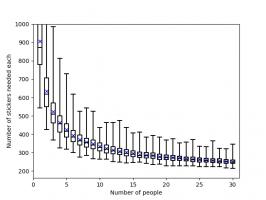 Adding 1 to a binary number the ends in 1 will cause 1 to carry over to the left. This carrying will continue until the 1 is carried into a position containing 0, and after this all the digits to the left of this 0 will remain unchanged.
Therefore adding a digit to the first \(n-1\) digits can only change the digits from the rightmost 0 onwards.


In all five cases, the \(n\)th term contains more ones or an equal number of ones to the \((n-1)\)th term, and so the conjecture is true.
Tags: binary, oeis, mathsjam